*Free Shipping on orders over $90* 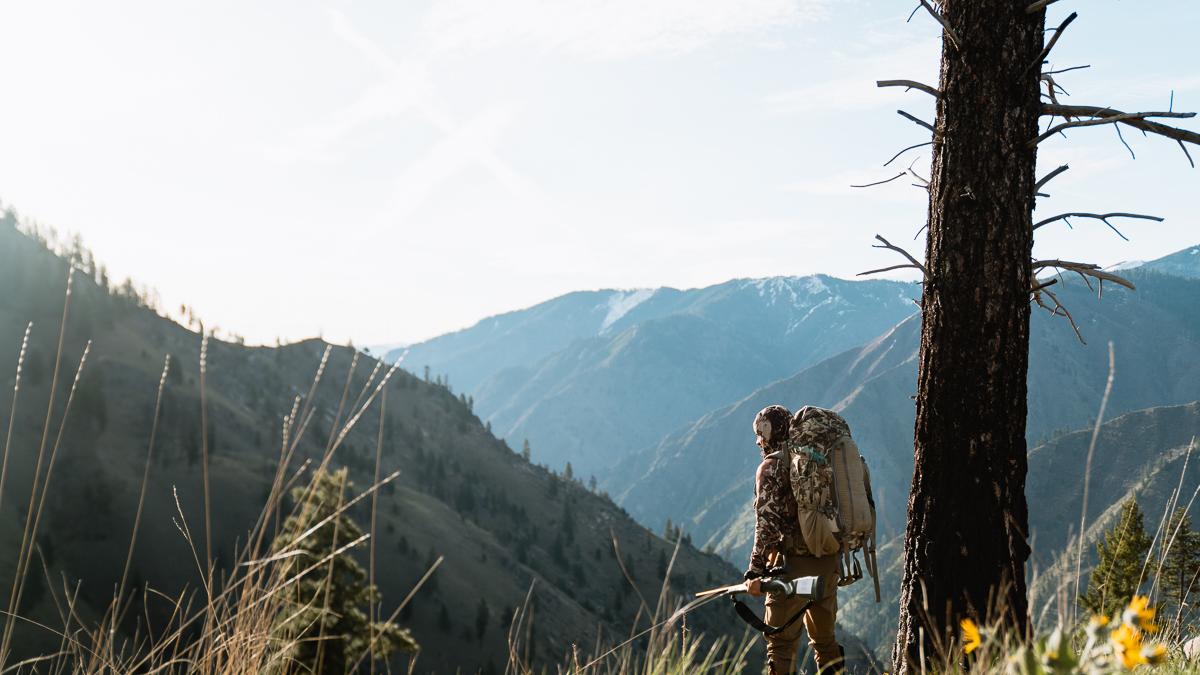 Spring Bear - Why You Need to Consider Spot and Stalk Hunting

The growing popularity of spring bear hunting over the past few years is undeniable. What was once more of a “just in case” type of tag has turned into a fairly sought after one. Hunters across the country are dusting off their boots, leaving the turkey calls at home, and heading towards lush green mountains in search of bruins with a hint of adventure. Spring bear season is upon us, so we thought it would be a good time to cover just that. We’ll run through why spot and stalk is where it’s at, early season vs. late, as well as provide some useful tactics to keep in your toolbelt for bear season.

As an avid bear hunter, I often get funny looks when I say “I’d rather hunt a bear than a bugling bull elk.” Call me crazy, but it’s true. From their reclusive nature and behavior to the breathtaking country they call home, the bears have my heart. These captivating animals can live up to 30 years of age in the wild. So, in the smarts department, they take the cake. An animal doesn’t live that long and not learn a thing or two, making them a more than worthy challenge for hunting.

Another plus to the bears is their meat. Bear meat is a highly misunderstood and underrated protein riddled with false rumors. Without going off on a tangent, bear meat is fantastic, and that’s that. Don’t let anyone tell you different. Just cook it well done to avoid the possible trichinosis.

As far as the spring season goes, it’s a great opportunity to test out new gear and brush up on those glassing skills that have been, much like the bears, hibernating for some time now.

For the adventure seeker, it’s tough to beat a good bear hunt. You’ll traverse some of the most rugged landscapes in the lower 48. The first bear I ever killed resulted in my buddies and I scaling a cliff. We leap frogged meat up the bluffs to get out. From that point, I’ve been committed to spot and stalk black bear hunting.

Why Spot and Stalk? 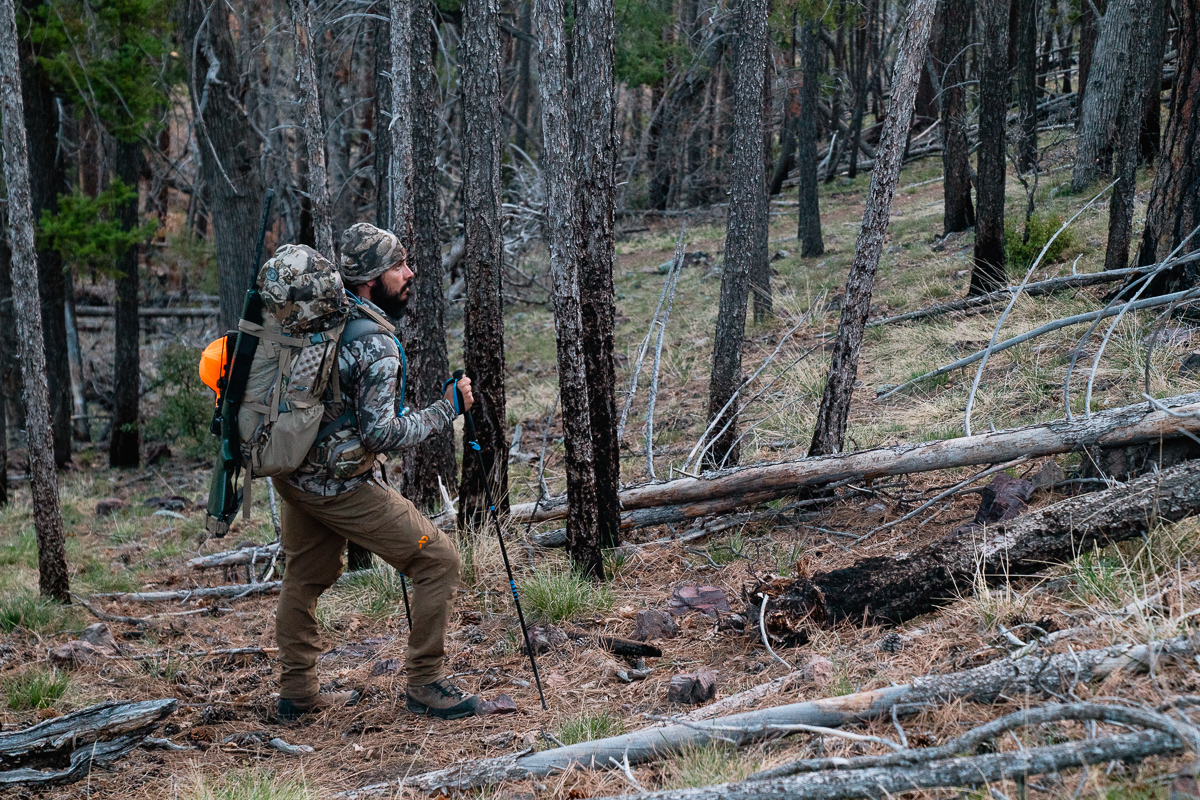 We’ve established that the interest in bear hunting is no doubt a growing one. With that growing interest, many new bear hunters are popping up. Traditional thinking often leads these folks to associate bear hunting with hounds or bait. Both are highly effective ways of bear hunting, but throw up a barrier to entry, which causes some to never pursue the bears after all. The truth is though, one doesn’t need to do these things to hunt bears. Spot and stalking is hand down going to be the best way for people to dip their toes into the world of bear hunting. Especially, if they are coming from out of state. The reason we feel that spot and stalk is the best gateway into bear hunting is because it really only requires a tag and willingness to go. It lets a hunter head out into the field to start hunting right from the rip. There’s no paying a houndsman or hauling bait week after week. Just pure bear hunting.

When is the Best Time to Spring Bear Hunt?

At this point, maybe you’re convinced to try out this spring bear thing and spot and stalk sounds like it’s up your alley. Early spring is a great time to do this. There are a few key reasons. First, let’s define early spring as being between mid April and mid May. Earlier in the season bears are just coming out of their dens and holding fairly tight to certain feeding areas. Bears will be more congregated in the earlier spring, as food is more concentrated, rather than widespread. Pockets of bears is what you’ll find. These animals are slaves to their stomachs which offers the perfect opportunity to lock one down to provide them with a backpack ride back to the truck. 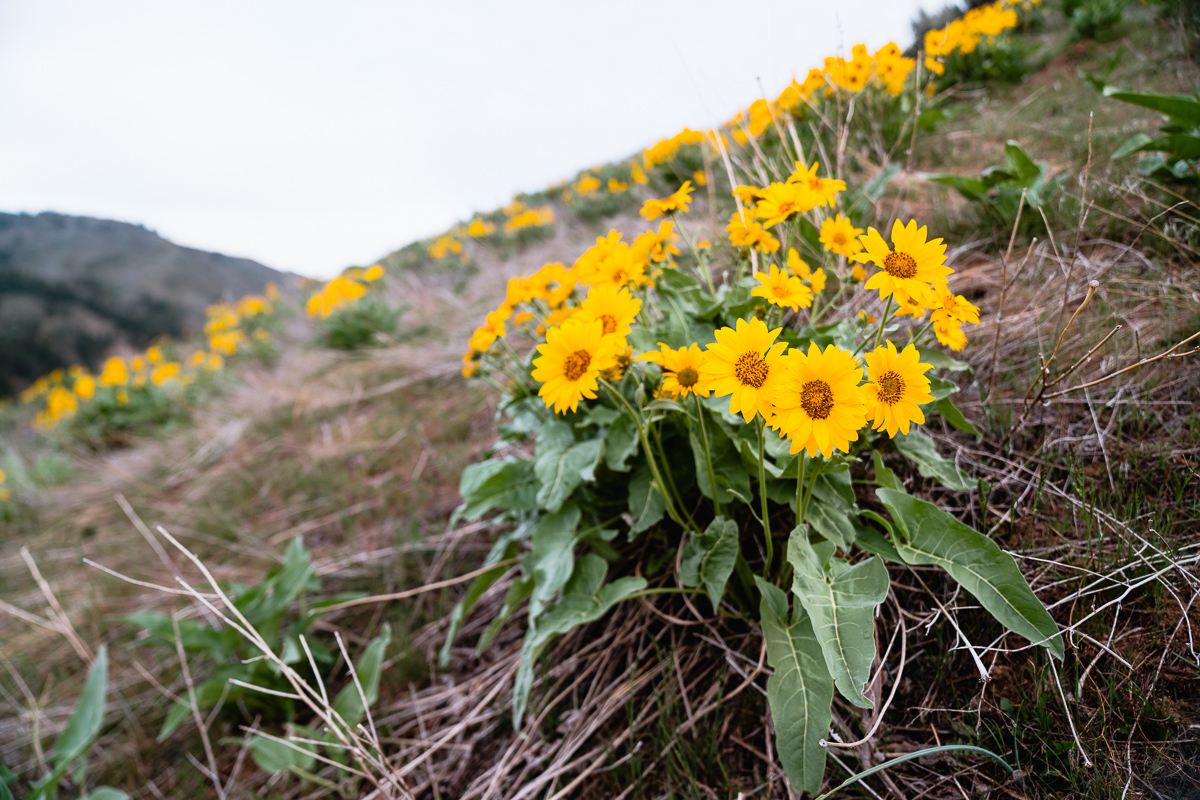 With the predictability of the bears though comes unpredictability of the weather. A snow storm is not out of the question during this time. Speaking of snow though, the snow line from winter will act as somewhat of a barrier. Bears break rules all of the time, but in general, you can bet that the bears won’t be above the snow line. They are going to be below it where all of the fresh green up is. This feed is essential to them at this stage of the spring and the chink in their chain where a hunter can capitalize.

What about the later spring? There is surely opportunity to kill a bear during this time. First, let’s define late spring between mid May and mid June(some states seasons even go into the end of July). Later in the spring we start approaching the bear rut. Boars will be constantly covering country in search of hot sows. This is similar to the deer rut when bucks are cruising looking for does. On the plus side one can turn up quite a few boars, but their predictability is non-existent.

Food is also much more abundant, meaning that the bears won’t be as concentrated, because they simply don’t have to be. They’ll be more spread out through country. All of this can make it much harder to get a bear killed, due to the unpredictability of the whole situation. I’m not saying this is a bad time to be out, because it’s not. Bears are moving quite a bit and a hunter can turn up quite a few. It’s making a play on them that’s the hard part. One can’t as easily assume that a bear will be where they saw them the previous day. So, if you’ve got an opportunity to make a stalk, you’d be better off to seize the day. That opportunity might not be there after the fact.

A Few Tactics to Consider for Spot and Stalk Bear Hunting

Elevation is Key – Use the Snow Line

When spring bear hunting, elevation is absolutely key for success. Bears will be where the food is, which is seasonally dictated by elevation. Lower elevations are going to green up first and that green up will continue up the mountain as the snow melts. Having a snow line really helps out. As we said above, it will act as somewhat of a barrier and keep bears below it for the feed. Once you do find a bear, notate their elevation and focus your efforts around that elevation band. Use this intel for other areas you might move to as well. If there isn’t a snow line, then you’ll have to use your eyes a bit more to key in on the elevations with the most feed. That’s where the bears will be. 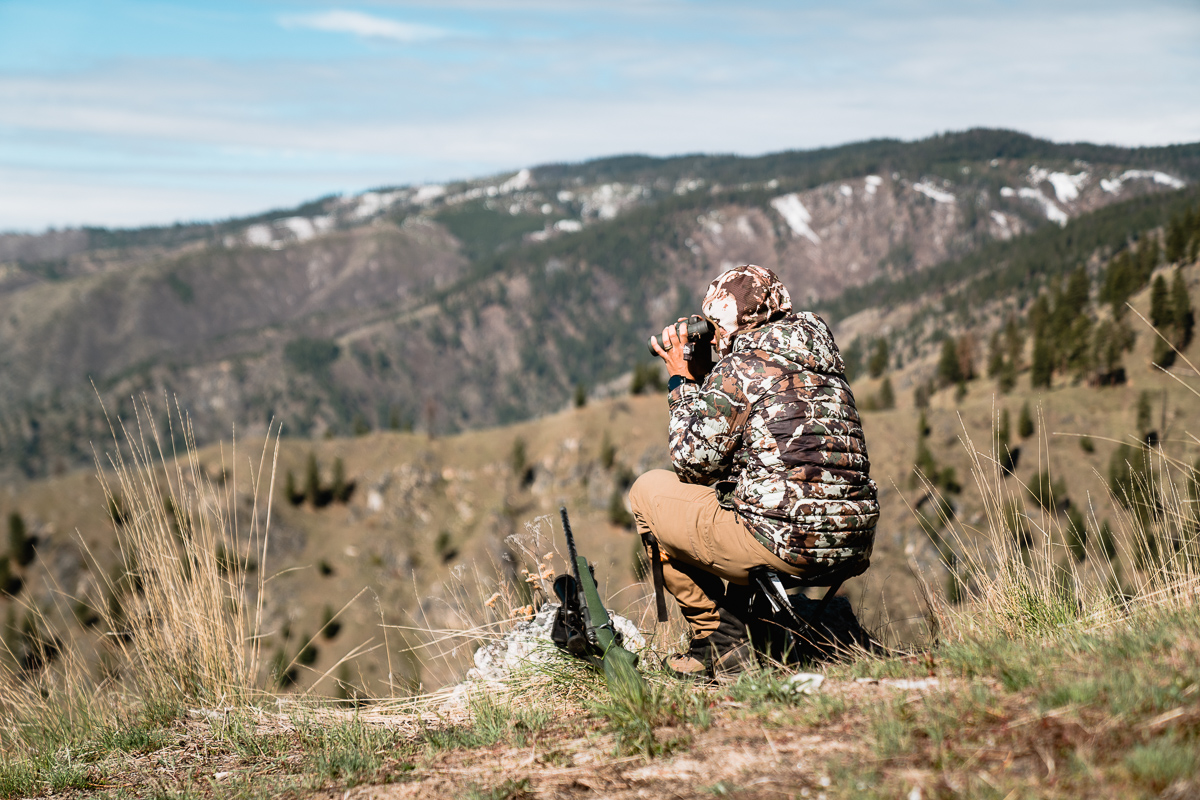 Glassing is hands down the best way of locating bears without disturbing them, aside from trail cameras. In the spring time plan on glassing all day long, as bears can move at any time of the day. Focus your glassing efforts in prime looking feeding areas. The most efficient way we’ve found to do this is by mounting our binoculars on a tripod and grid searching the surrounding country.

On top of covering ground with your binos though, be sure to cover ground with your legs moving from glassing spot to glassing spot. Bears are fairly mobile, so they stick out much easier. This means that one can rule out an area and move on a bit quicker until they do find a bear. If you haven’t seen a bear in a morning and evening of glassing, move spots.

Once you do find a bear, be sure to take the time to make sure there aren’t any cubs with it. Sometimes cubs can be hidden and won’t pop out right away. You don’t want to shoot a sow with cubs, as that is illegal. Be sure of your target. 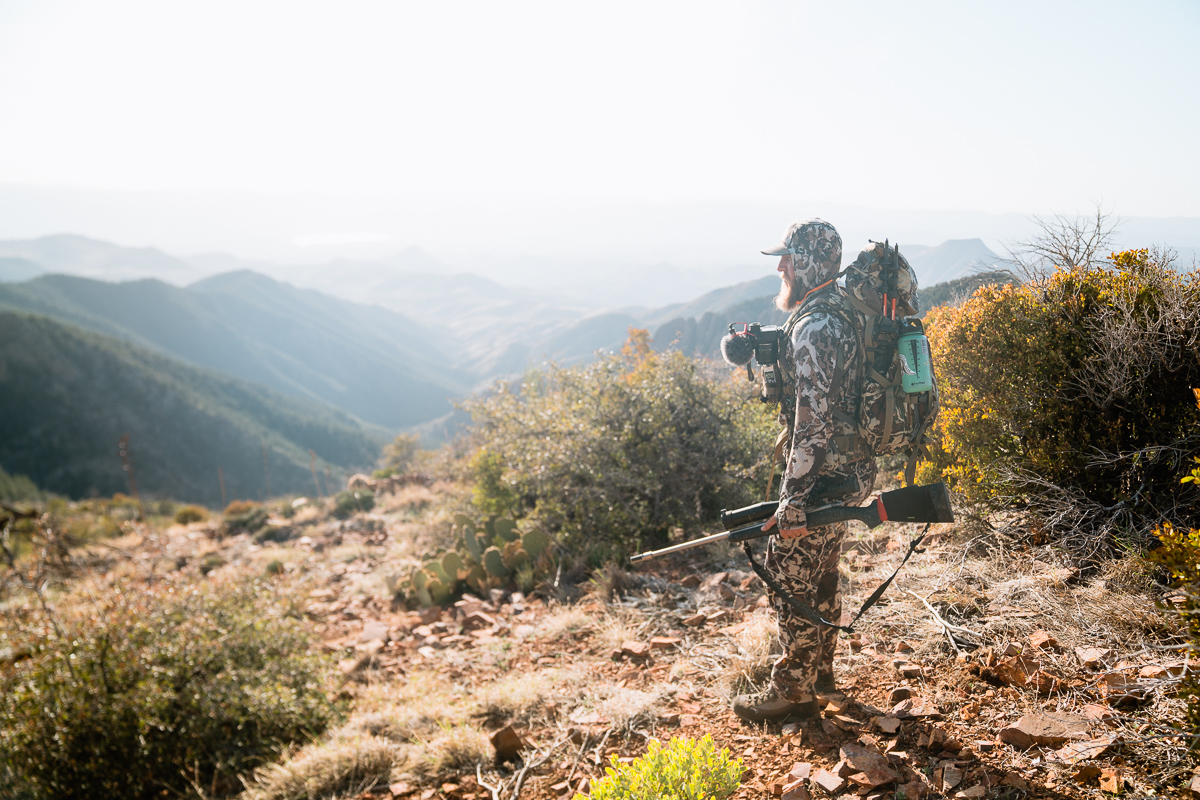 Because bears move around quite a bit, closing the distance on them can be a bit tricky. They act as a ping pong ball on a hillside bouncing from feeding source to feeding source. With that being said, this is when you should close the distance though. Bears get so keyed into their food, that it causes them to not pay as much attention to what is around them. Plus, it’s about as non-mobile as they are going to get, aside from them bedding of course.

On your approach, be sure to have the wind in your favor. Unlike turkeys, bears have a nose stronger than that of a bloodhound, and more times than not, that is what will get you busted. Their eyesight is ok and their hearing is good, but their nose is next level impressive. Don’t take a chance on that one.

Lot of Opportunity for the “Just in Case” Tag 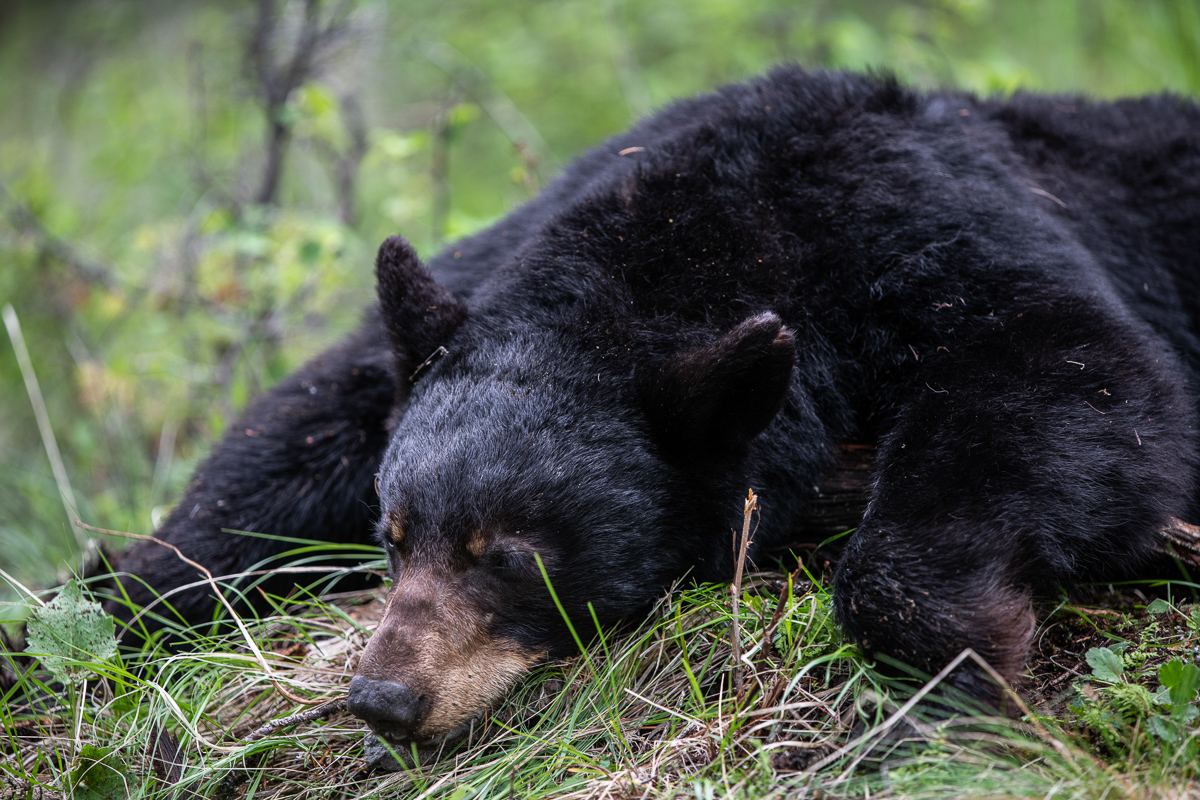 While bear hunting may not be as popular as elk, deer, or even turkeys, the west is actually teeming with opportunity to chase bruins. One has to just be willing to look. In quite a few places, a hunter doesn’t even have to draw a spring bear tag. They can purchase them right over the counter, and sometimes even get two of them. So, for anyone that has been kicking around the idea of spring bear hunting, you’ve literally just gotta get up and decide to go. And going the route of spot and stalk allows one to jump right in head first. Those turkeys will still be there when you come up for air, I promise. You never know though, I might just make a bear hunter out of you after all, and that “just in case tag,” might turn into your favorite tag of the year. Good luck in Bear Country!